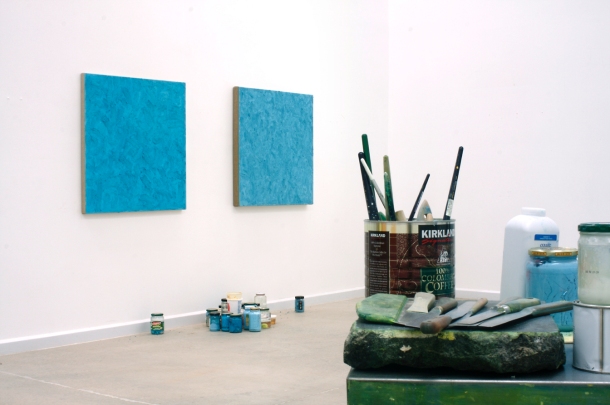 Brent: If color were a stamp then yours would be green. Though recently not all things have come up this way: You have moved into orange and apricot, banana yellow and powder blue, just for starters.

Alan: I have been watching colors besides greens for years as I mixed or ground different pigments to achieve this stamp of color. As there are not too many naturally green pigments, powder blue and banana yellow mixed together would have been a likely place to start. But before we go any further let me say that I have no idea what powder blue is, or banana yellow? The many different shades of yellow-green that are apparent in a typical banana could actually encompass 15-30 various hues, and is powder typically blue? If one were able to see the under painting, or ground of a typical Ebnother from 1990 under the Veronese green earth, one would find pinks and oranges waiting for the earth pigments to lose their opacity and slowly become transparent: A process that starts after 100 or so more years. What has changed over the last period of time is that these colors are no longer hiding under a green skin; slowly working their way to visibility, they are out of the closet and onto the surface.
For that matter if you happen to see a painting of mine from 2002~2007 you will see what I call windows. Small areas where these non-green alien colors are visible and

poking through…I basically moved to the desert in an attempt to completely open the surface of my paintings, and let the light out.

You know, I’m still a bit ticked off about the reference to “banana yellow.” Before color can be used as an expressive medium it has to become abstract. Unless we develop the skills to distinguish or acknowledge different hues of a color without referencing nature or society our color sense has no way of developing further. Remember color is not a given, and human interaction with color is a sense as is hearing, seeing, taste, and smell.
I firmly believe that even for you to be referring to a certain yellow as “Banana yellow” degrades the whole concept of a color experience. Come on, we do not have a vocabulary for most of our senses–so why do we think it is correct to attempt to categorize a color experience?

Brent: Thought maybe you’d be a little peeved by the banana yellow reference. Actually I was looking at the paintings you had in your recent show at George Lawson’s in S.F. One is orange. Another, the color brought down, becomes peach. And then I turned to the yellow and thought, ‘what color is this?’ You are right! When I started thinking about the color as ‘label’ I was already switched off.

So what you are saying is that color should be seen for what it is first without reference or association, and definitely without fancy label. And for a painter who is quite literally painting color the experience of color has to work direct.

Alan: I started painting later then most of my colleagues or contemporaries. And having a concept to hide behind green hopefully gave me two things: A school, with boundaries, that I could function within, and boundaries that I could later push, and push against. Also it was a concept that the current art market would accept, which would give me time to actually learn how to paint, while being a participatory member of the scene.
Painting Green gave me this, and painting tondos for over twelve years further distanced my work from any of the current critics, allowing me the freedom to develop.
What you are referring to as ‘cameo appearances’ was a slow evolution of allowing. I allowed the color to emerge after time. I relaxed, so to say, and opened to the color world.

Brent: You mention a small red painting. Did you have it in mind to make a red as apposed to green painting? Or did it happen as part of a stage, a layer of red?
When you decided that indeed you had made a small red painting, what was the initial impact?

Alan: Red being at the opposite end of the spectrum from Green was of course inviting for my mind. The red painting that I spoke of doing was not entirely successful for me, and eventually it was put in the storage. The left over paint I remixed and softened with yellows, moving on to paint five very small 12×9 inch panels. These were very successful paintings but Red pigments remain an enigma for me and I feel a lack of understanding for them. I am assuming that there is a personal color memory, or a piece of cultural color baggage that I carry around that is keeping me from understanding red.
The color baggage that we drag through our lives is amazing. Our color memories are stamped and formed by personal associations gathered from childhood on.

Brent: Smaller paintings, for example Small Pink, July 7th 2009 and June 3rd 2008 #4, 2008, expose a playful structure of angles and lines. Small Pink appears to have this beautiful white underground upon which you have moved in with some structural line work first?
June 3rd has similar structure going on too, but feels that it has been embedded more (I can’t tell where you started with the final skin.) Both the marks appear quick and mostly made without too much going over the surface again. Another, Blue, March 8th 2009 suggest something different, you can ‘feel’ the paint moving over paint via observing the surface. And that feel becomes the color. Do the marks shift depending on ‘group of paintings’ ‘color of paint’, again, probably related to group ‘scale’, or is it just what comes? Has the shifts in color impacted on your mark making?

Alan: Small Pink, July 7th 2009, has an under-painting ground color cut with lead white, which registers as light pink. Basically I moved into this painting with the final skin and the color contrast was a bit much for me to handle. I was working on building up a painting but leaving it as open as possible. The light pink under-painting was too strong for the delicate pink skin and I instinctively began to mark stronger and define the bottom perimeters of the support in an attempt to acknowledge the edge of the support to overpower the color contrast that was happening. This is a love hate painting, and I am 50,50. It’s certainly playful, and certainly does acknowledge the structure and play off of the support. For me the question still remains have I achieved more than this with the painting, or is it a throw away. 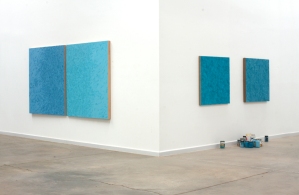 #4 has a greenish yellow under painting. I went over this with a thinned down version of the red final paint working extremely relaxed and playing off the work that came before. Building this painting off of the left (almost centered) triangle––this painting is for me almost perfect.
Regardless of what I have said painting works of this size is extremely demanding and requires everything that I possess. The reality is that in a work of this size you cannot enter and easily lose yourself in a field of marks encompassing your peripheral vision. This means that the defining and creating of space through definite marking is all that the viewer owns or has to go by.

Brent: I like that you have very clear opinions about what works, what isn’t working, and 50/50. A painting that fails is a bummer. An almost perfect success

speaks for itself – and that 50 is in the mix.
Clarity is ruthless and can seldom tolerate less. Though waking and seeing differently can kick it either way. And isn’t it just often a matter of waiting?

A few words you sent…

defining space
creating space
giving a color feeling creating a small world, defined enough to allow time and space suspension are all extremely realistic problems related to the painting of a small painting.

These phrases can just as easily equate to what is happening inside the paintings’ borders as to what is going on outside of them. Likewise, with this word ‘feeling’ it works internally but also has the sense that you want it to move out, to externalize. You continue by saying, what amounts to, ‘defined enough to allow time and space suspension.’
Talking optimum, taking out that 50/5o, considering all things that are going on 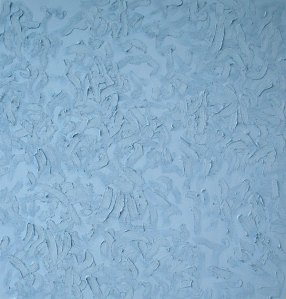 inside a group of individual paintings, your recent body of work if we could, in a physical space, what is this optimum time / space suspension?

Alan: When I go down to the studio right now it is filled with new blue paintings. There are seven walls in the studio, the smallest being 7 yards across by 23 feet high, and the largest 14 yards across by 23 feet high, so basically there is room for a few paintings. At the moment there are eleven new blues up and there is room for five more, without crowding. I paint around the studio on the free wall 85% of the time but there are a few walls where I am not comfortable painting on them at all: On those I simply hang.
Before I started the blue works the studio was filled with work for rfprfp in San Francisco, and work for Gisele Linder, Basel, two solo shows happening fairly close to one another. I emptied the studio and slowly began filling it with the new blue.
The work is still so new to me that when I walk in I pretty much just drop my mouth and stare. IT IS ALL BLUE! I really have no idea what to think, except that it is really beautiful and the range of blue is getting impressive.
This group of work was started with stretching five canvases and then starting to ‘rabbit skin glue’ them, one at a time.
And as one was drying I’d start the next. After doing a couple I would begin to put a lead ground on the first one, etc…
Always a few going on.

Where my name pops up